The main match of the World Cup and all of 2022 took place at the National Stadium in Lusail. In the opinion of many, this was one of the best matches in the history of the World Tension Championships, as a result, Lionel Messi lifted the most long-awaited trophy in history for the first time in history. When emotions have subsided somewhat, it is worth doing a short review of the Football World Cup in Qatar.

Hands to the final: France - Argentina

Neither bookmakers nor neutral fans saw an obvious favorite. Everyone was waiting for a great match, each of the teams had their own advantages. The French national team played in their second World Cup final in a row and could become the third team to defend the championship title at the next World Cup. Rabiot and Upamecano, who caught a cold infection, were not included in the French team at the semifinal match, and Coman joined them due to illness. In training, they played Thuram instead of Giroud, who had health problems.

In addition to minor injuries and talk about the possible appearance of an injured Benzema in the application, France had no more questions about the composition. Karim himself eventually refused the invitation and all talk of his possible return immediately disappeared. 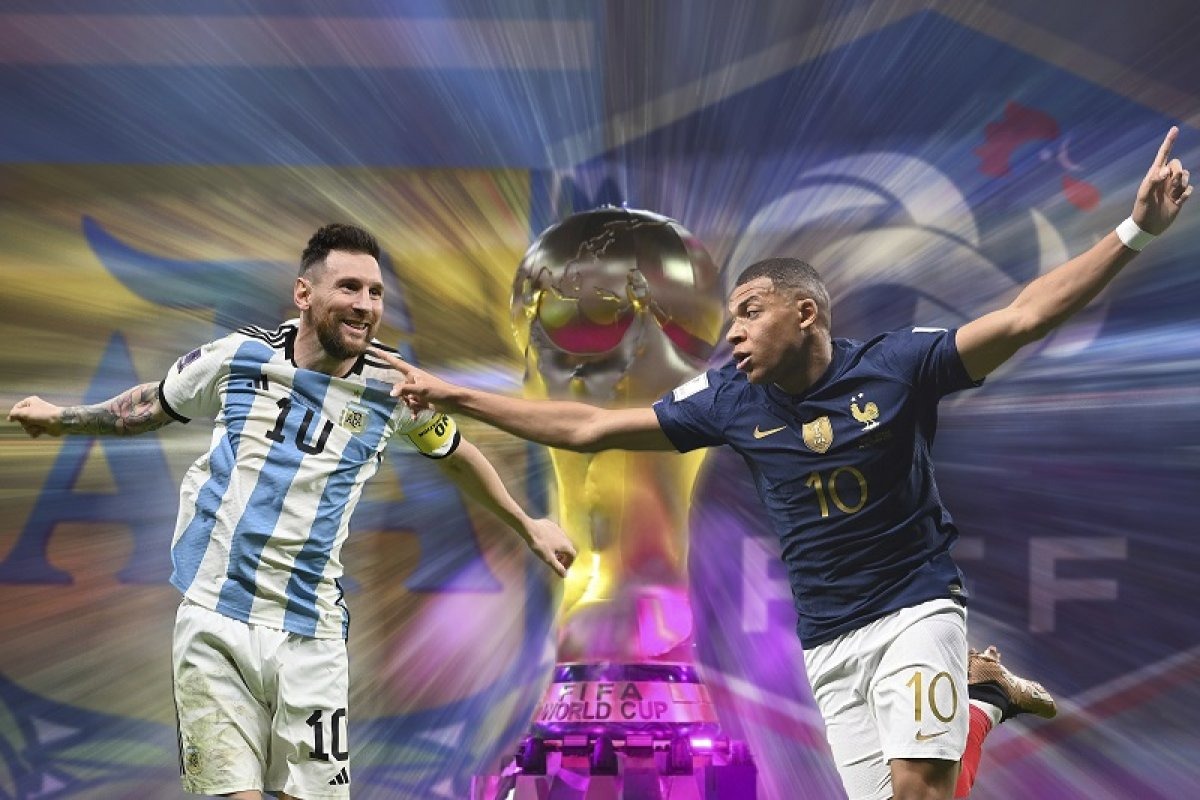 Argentina had no problems with the squad before the match: there were no injured or disqualified among the leaders, Messi was ready to lead the team. The media heated up the themes that, in the event of a defeat, Lionel would announce his retirement from the national team, and he had the last chance to equal the level of greatness with Maradona. No one could give a clear preference to one of the teams in the 2022 World Cup final.

Starting Lineups for the World Cup Final in Qatar

First half of the 2022 World Cup final Argentina - France

The first 15 minutes began with the control of the Argentines, France unexpectedly gave the ball away and could not normally get out of the pressure. Argentina scored twice on target and generally looked better than the opponent. The apathy of France looked amazing, Mbappe completely fell out of the game, Deschamps’ team did not hold the ball at all due to the hard pressure of the Argentines. France’s first shot attempt came 19 minutes after a set piece, when Giroud fouled wide of the goal.

And in the 21st minute, the first goal of Argentina came - di Maria screwed up Dembele on the border of the penalty area and he cut down Angel - chief referee Szymon Marchiniak confidently pointed to the point. Messi confidently spread Lloris and the ball in the corners - 1:0. 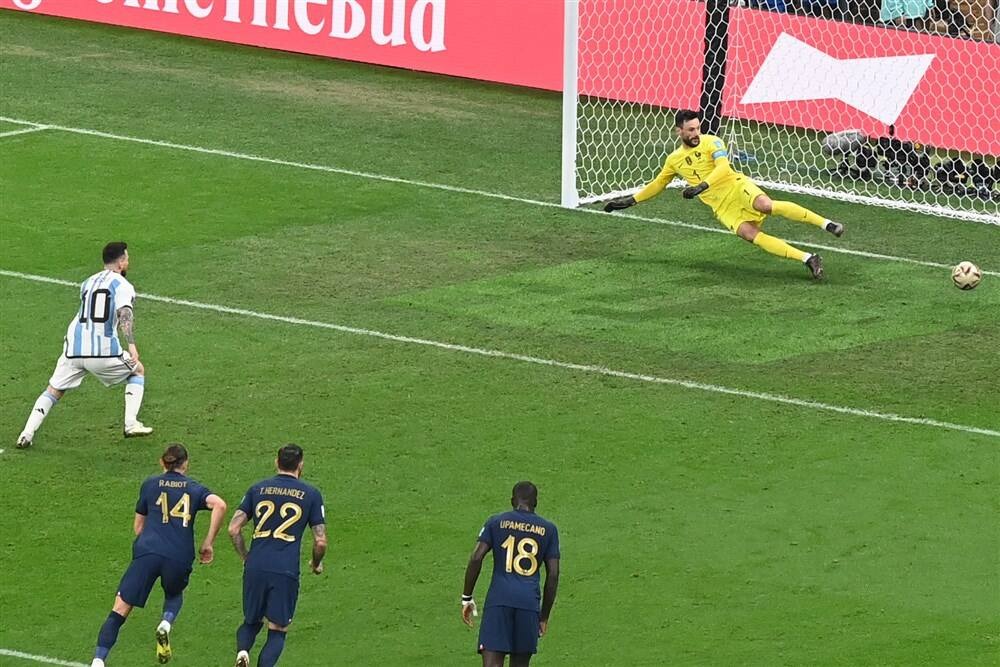 The conceded goal had absolutely no effect on the course of the match, Argentina continued to press high and not give freedom to the midfield players, while Messi regularly supplied balls to the right flank of the attack, where di Maria destroyed Kunde. The second goal came as a result of a brilliant counterattack in 4-5 touches: Messi brought Alvarez out, he gave McAllister a free space in touch, and he brought di Maria 1 on 1 with Lloris - 2:0. Argentina’s dominance continued until the end of the first half, France did not have a single shot on goal for the entire half - just a shock for the current world champions. Deschamps made it clear that he did not intend to tolerate such a game and even before the break he replaced Dembele and Giroud with Thuram and Colo-Mouani - these two are actually newcomers to the national team, before the head coach trusted them to try to turn the game around in the second half. After the first 45 minutes, the Argentine fans mentally tried on world champion medals, absolutely on purpose.

Second half of the 2022 World Cup final Argentina - France

The beginning of the second half was a complete continuation of the first: Argentina created dangerous chances, and France rolled the ball dejectedly without much progress. The FIRST blow towards the goal happened at the 70th (!) minute - an inconspicuous Mbappe hit strongly above the goal from outside the penalty area. It seemed that France had exactly zero chances even for one goal. But on the 79th minute, the mistake of the veteran Otamendi affected - he first unsuccessfully processed the ball, and then clearly fouled on Colo-Muani - Marchiniak put the second “iron” penalty. 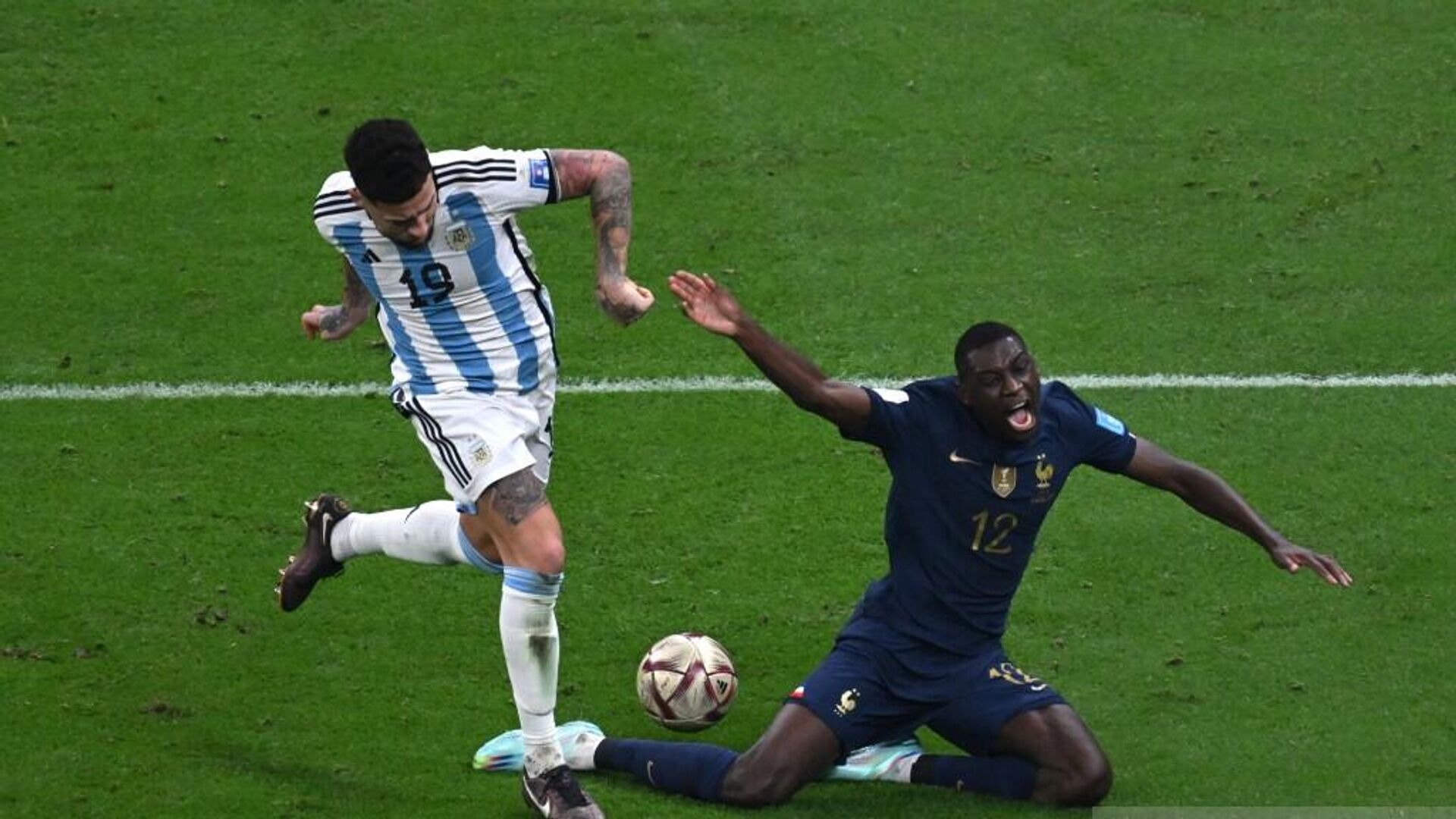 Mbappe did not leave a chance to Amy Martinez - 2:1. While the Argentines found Colo-Mauni in a state of shock and Mbappe built a second goal that finally threw the South Americans into a stupor - Mbappe flashed Martinez with an incredible hit on the touch and brought France back to life, turning the game around. And Coman started an assist attack, robbed Messi while trying to escape to the counterattack. 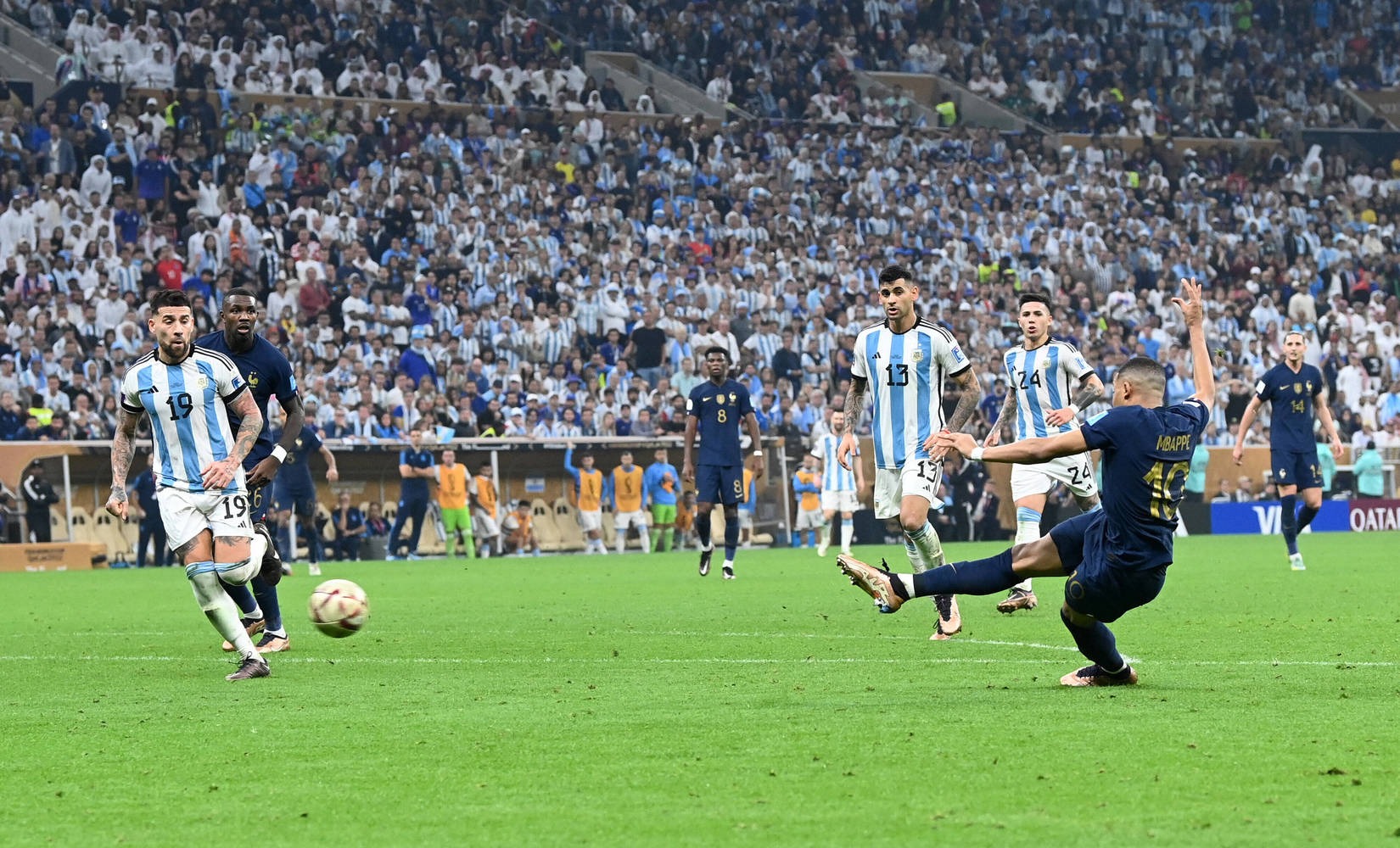 Quite unexpectedly, France, after 70 minutes of not showing anything, was able to make an incredible comeback and return the intrigue to the Qatar 2022 final. The constant pressure and charge of the Argentines came back to them - after the second missed goal, the center of the field simply stood up, it was clear that they lacked stamina and were emotionally devastated. France went ahead on the wave of success, but in the 97th minute Messi could finish everything at all - his classic dribble kick in a stunning jump was beaten off by Lloris.

The match went from the full advantage of Argentina to extra time - the Scaloni team for the second time in the playoffs of the World Cup in Qatar misses a 2-goal advantage at the end of the meeting.

In the extra half, it seemed that France, on emotions, would run to “finish off” the Messi team, but the game again began to resemble the first 70 minutes of regular time. Argentina was able to return and began to create chances at the gates of Lloris. In the 110th minute, after a chic counterattack, Martinez, who came on as a substitute, screwed up the shot, but Messi was on the rebound, who again brought Argentina ahead - 3:2. France again failed to adequately respond to the conceded goal from the South American fans were already preparing to celebrate, but Mbappe’s kick from outside the box turned everything upside down again - Montiel played unsuccessfully with his hand and Marciniak put the third penalty in the 2022 World Cup final without much thought. Mbappe again easily scored - 3:3. This is the second hat-trick in the history of the finals since the 1966 World Cup and the famous hat-trick of the Englishman Geoffrey Hurst. 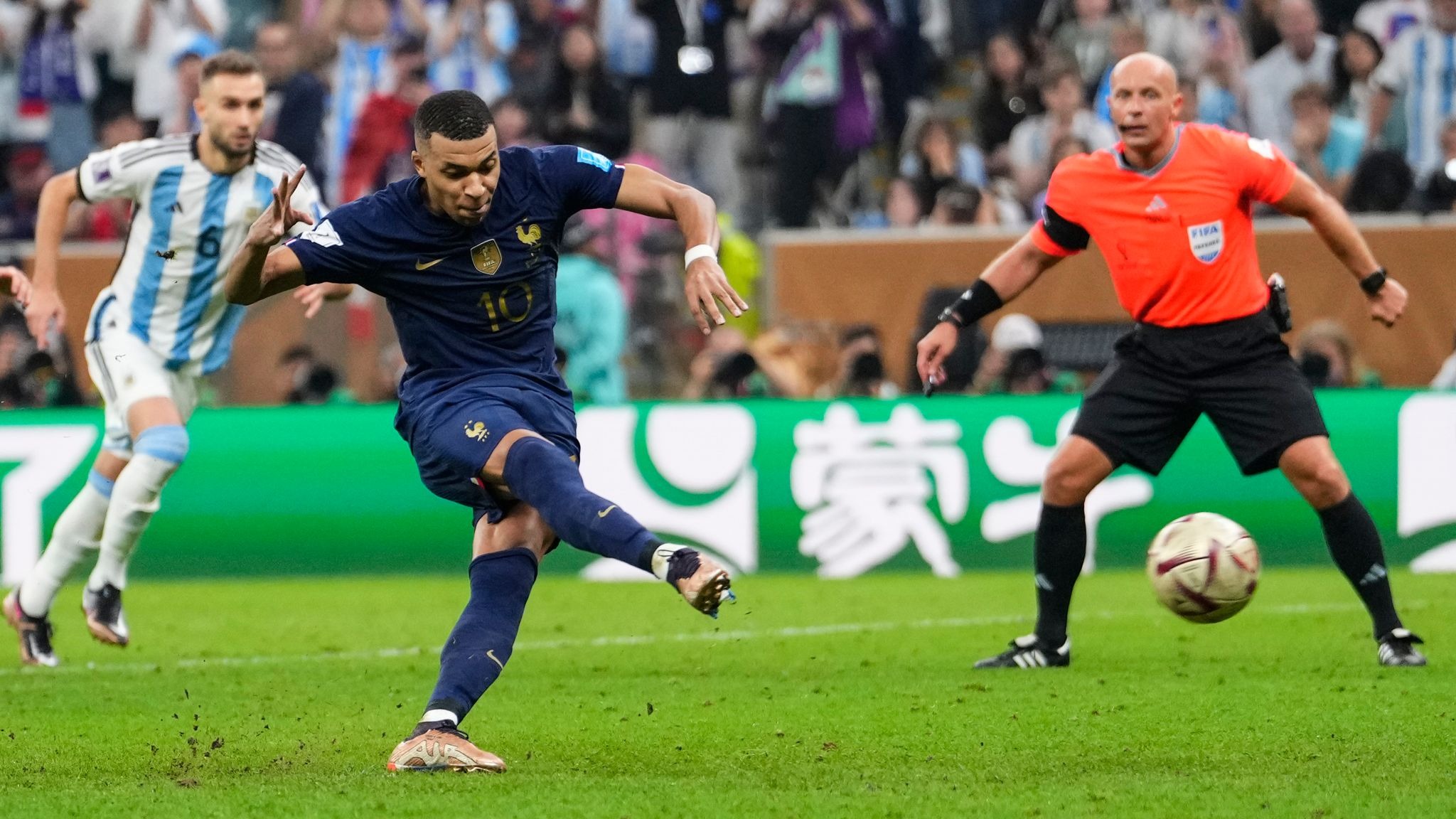 What happened in extra time to extra time is difficult to describe in words. At first, Martinez did not score a 1 on 1 exit, and in the 124th minute, Colo-Muani could have become a hero of the French nation, but Martinez the goalkeeper saved after a point-blank shot and gave Argentina a penalty shoot-out. The history of the world championships has never known such a heated finale! 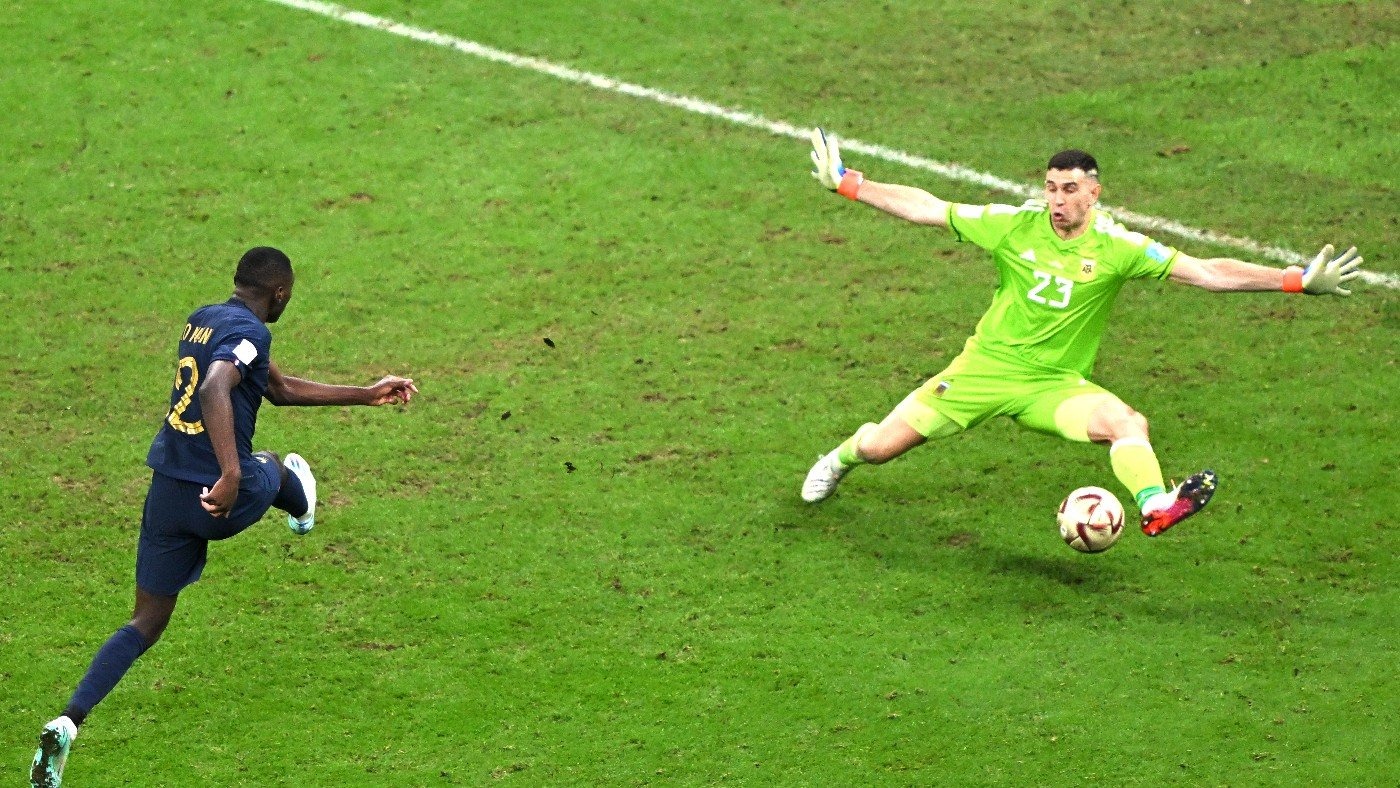 Messi and Mbappe did not delay and confidently converted their first shots in the penalty shootout. Coman, who was second to France, shot uncertainly - the master of psychological pressure, Martinez, easily took the ball. But Tchuameni completely shot past the gate, putting Deschamps’ team on the brink of defeat. Dybala and Paredes, who came out under the penalty shoot-out, confidently scored, just like Colo-Muani. But the decisive penalty in the series was scored by Montiel, the one who brought the penalty in extra time. ARGENTINA BECAME THE WORLD CHAMPION AFTER 36 YEARS! 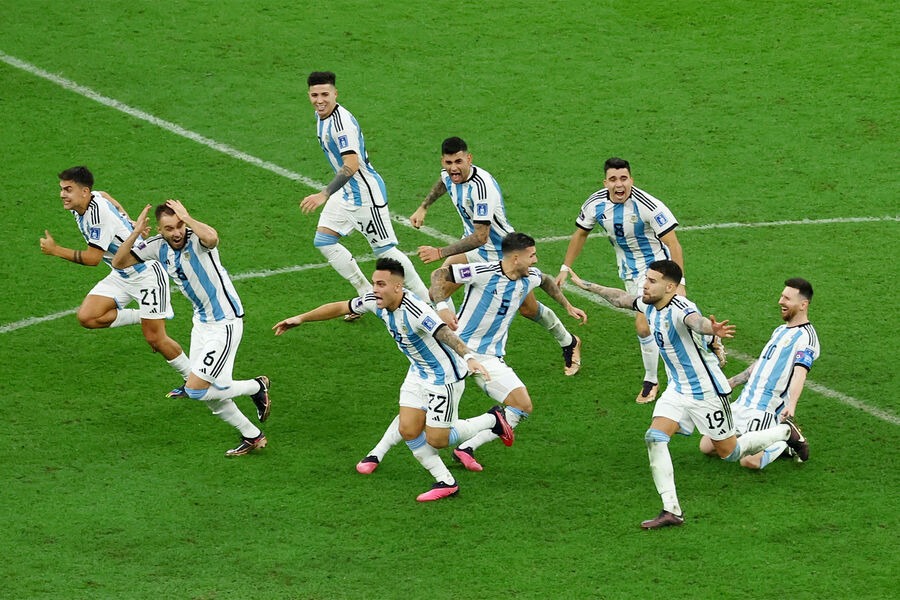 Brief results of the World Cup final in Qatar

Argentina deserved this victory, despite a mini-failure in the 80th minute of the second half. They were better in every aspect of the game, Messi and Di Maria had the best games of the tournament, De Paul just burned the center of the field with McAlister, Romero was reliable, and Martinez just saved the team in a difficult moment. France played the worst football for 78 minutes, but Mbappe’s insight gave them hope again. But Deschamps’ team appeared in the final as a faded version of themselves. Griezmann failed, Kunde was beaten on the right flank, everyone who could, starting with di Maria, Giroud and Dembele did not receive marks for the match at all. The Argentines deserved to win, the great Messi finally fulfilled his dream and was able to lift the coveted cup over his head at the age of 35. Bravo, great heir to Maradona!