Netherlands team at the 2022 World Cup

Roster, group and matches of the Netherlands national team at the World Cup in Qatar

World Cup 2022 of the year for the first time will be held in the winter, for reaching the semi-finals and the trophy, the Netherlands team led by Louis van Gaal can seriously compete. This specialist won the main trophies in his life in the 20th century, took the Champions League, the UEFA Cup and several championships with Ajax, as well as several trophies with Barcelona. In modern times, an unsuccessful coaching trip to Manchester United and a career pause of 5 years followed. Van Gaal won bronze medals with the Netherlands for the first time in 2014 Fifa WOrld Cup. For the third time in his career, van Gaal was able to take the team in 2021, and he is going with her to the second World Cup.

The team from the country of tulips is quite old, with a minimum number of world stars in the composition. The generation of Robben and van Persie is gone, instead of them there were no worthy successors in the attacking line, except for those of Depay. The Netherlands national football team is going to the 2022 World Cup in Qatar in the list of 7-8 contenders for medals, but few people predict a high place for them.

Our editors made their prediction for the World Cup at the request of the “orange” for the FIFA World Cup. It contains players who are ready to start and have shown themselves well in recent months. The goalkeeper line of the Netherlands national football team at the World Cup looks the weakest. Neither Cillessen, nor Bidglow, nor Flecken look like a reliable number one. Only Silessen has the experience of playing in big matches, albeit not entirely successful ones. It is he who will take a place at the base, van Gaal will not play completely inexperienced newcomers at the level of national teams.

The line of defense, as opposed to the goalkeeper, is one of the strongest. It is led by the main star of the “orange” and the leader of “Liverpool” Virgil van Dijk. Despite a serious injury, he remains the backbone of the defense, van Dijk helped the Netherlands reach the final of the first League of Nations. Great defenders from the top clubs in Europe can play with him at the World Cup:

The young Eredivisie representative Jordan Teze will be in the cage, the left flank will be closed by newcomer Manchester United Malasia and the super-experienced leader of the national team Daily Blind. One of the leaders of Inter, Dumfries, will definitely come out at the base on the right. Hans Hateboer is a great replacement as a lateral.

The center of the field is commanded by de Jong, who spends the worst period of his career, which Barcelona does not really need. But in the national team, he shows an incredible level. He can be played by Atalanta’s tough Compmeiners and Bayern’s young talent Gravenberch, as well as van Gaal Klassen’s tough clip.

The attacking zone of the Netherlands national team raises a lot of questions. The only scorer teams at the World Cup Memphis Depay sits in Barcelona’s reserve along with de Jong. There are few options for a replacement in the center of attack, Malen from Borussia can save the situation. The reserve will be average even by Dutch standards Wighorst from Besiktas. The flanks of the attack will be ironically occupied by Gakpo, who is having a great season, and Bergwijn, who returned to the Eredivisie, will compete with Danjuma at the 2022 World Cup in Qatar if he recovers from injury.

The Dutch national team: the history of performances at the World Cup

The Oranges have never won a World Cup in history, but they have taken silver medals three times and bronze once. Van Marwijk’s team had the most realistic chance of winning the World Cup in 2010 - but in 119 minutes of extra time, the Spaniard Iniesta crushed Holland’s hopes. List of all the achievements of the Netherlands national team at the World Cup: “Orange” went to the World Cup in Qatar, judging by the table easily. But everything was decided in the last round of qualifying group G, in which the Netherlands were ahead of Turkey, Norway and Montenegro. For 10 matches, van Gaal’s wards suffered only one defeat and scored 33 goals.

The Netherlands national football team went to the World Cup in Qatar group A with the hosts of the tournament, Ecuador and Senegal. It is with the African national team that the team will compete for advancement from the group. World Cup 2022 Tournament Table favors “orange”, leaving the group will be easy, based on the composition and experience.

Forecast for the World Cup for the van Dijk team - a maximum of ¼ finals.

What will the Netherlands have for the World Cup group?

Van Gaal traditionally plays in a 3-5-2 formation with active wingers. According to our forecast, the first matches at the 2022 World Cup will be in the following composition: Cillessen-van Dijk-Ake-de Ligt-Malasia-Dumfries-de Jong-Compeiners-Hakpo-Bergwijn-Depay. Teze, Teal and Wighorst can go on the attack as a replacement.

Who is the Netherlands' top scorer in the World Cup?

The Oranges are going to the 2022 World Cup with Depay as the main goalscorer, he scored 42 goals for the national team. The second scorer in the squad is Davy Klassen with 9 balls. Such an abyss speaks of the level of attack of the Dutch national team at the World Cup. And in the tournament itself, Robben, van Persie and Patrick Kluivert scored a lot.

What are the odds for the Netherlands to win the World Cup?

Bookmakers have little faith in the victory of van Gaal’s team at the Fifa World Cup. Users can bet on this at the bookmaker’s office with odds from 15 to 17. Getting into the semi-finals is estimated by odds from 3.3 to 4. Leaving group A is estimated at 1.5.

Where can I watch Holland's matches at the World Cup in Qatar?

Statistics of the Netherlands national team, all matches and the standings are available on our website! All sections of the main menu are aimed at maximum immersion in the 2022 World Cup. We will cover the group stage and playoff matches in full. 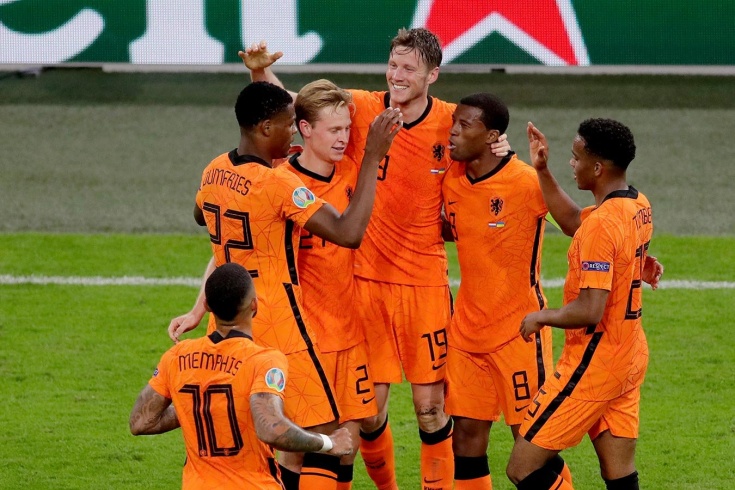